Note: This report was written a couple of weeks after the game, so some incidents have been forgotten. If you have any treasures from this game, or indeed any corrections or improvements, please email AB. If you took a wicket, a catch, run out, or hit a nice boundary, or anything else (dropped catch!), feel free to give me a description for inclusion.

Match conditions: 45 Overs, 11.00 AM start. Weather fine with a few clouds. Due to previous bad weather, conditions were very damp and the previous weeks pitch was reused.

Alan Clark won the toss and put the president’s in to bat on a sticky wicket. Malcolm Hills opened with Adrian Hills and Mike Jackson opened the bowling (downhill). President’s made a steady start reaching 16 before Malcolm was run out in the 9th overs. That brought in Matthew Johnston, but scoring continued to be limited with Alan Clark supporting Mike in his opening spell. Alan and Mike both finished with tidy figures of 0 for 13 as Guy Burford and then a few overs later Neil Robinson joined the attack.

Adrian and Matthew made good progress until Guy took the edge and had Adrian out caught for a nice 22 (50 for 2). Phil Knox, relatively new to the Holton set up, joined the party and President’s enjoyed their best partnership (48). Matthew was looking to be heading for a big score, however the wicket was starting to play up a bit. Alan Banyard (replacing Neil) bowled one into the rough just outside leg and the ball bounced over off stump. A couple of overs later a similar ball slightly more pitched up gave Alan his first wicket as Matthew was bowled for an excellent 42. Three runs later and Phil chipped one up to Graham Hawkins off Alan to go or a well made 17 (101 for 4).

David Peddy and guest Richard Denner then put on a fine partnership of 33. Graham Hawkins replaced Guy and in his final over he ended the stubborn resistance of Richard Denner bowled with a good straight one. That left Giles Shorthouse to come in for the last ball, a full toss which he promptly pulled for four. David Peddy was left unbeated on 23, including 3 boundaries.

After a nice lunch provided by Petula, the captain’s XI set about the chase for victory. The camera man (AB) was down the order at 9, so had ample opportunity to take a few snaps. With John Simpson, last years man of the match taking a holiday (to give someone else a chance!) Peter Cowdrey faced the first over against Mike Shorthouse and batted out a maiden, mostly well targeted deliveries outside off stump. That was followed by Malcolm Hills bowling to Simon Switala ……….. another maiden. Captain’s XI 0-0, run rate creeping up. 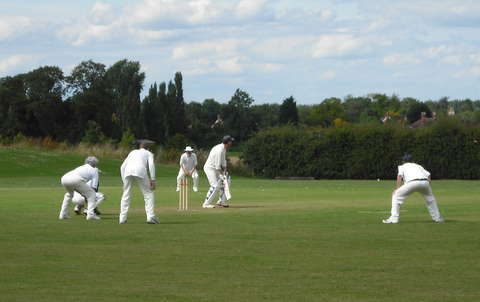 Simon Switala – looking to get off the mark against Malcolm Hills. 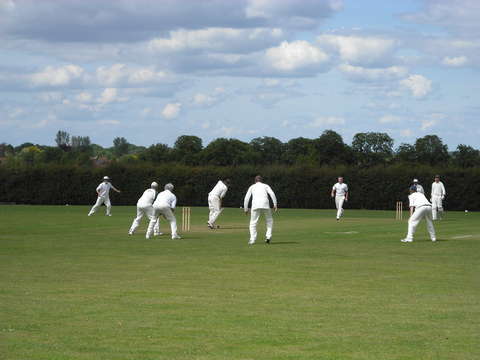 The score progressed slowly but safely to 10 for 0 off 7. Then Mike Shorthouse delivered a straight one and Simon was trapped LBW for 1. 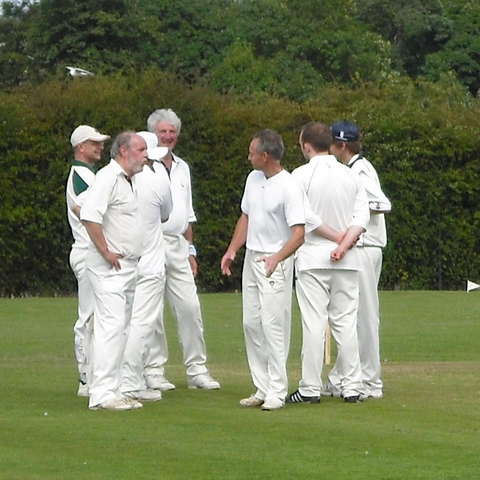 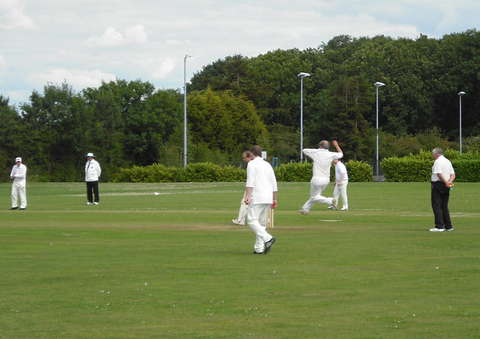 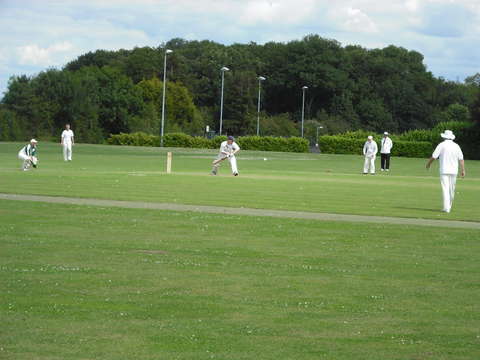 James Race – looking to repair the damage of an early wicket. 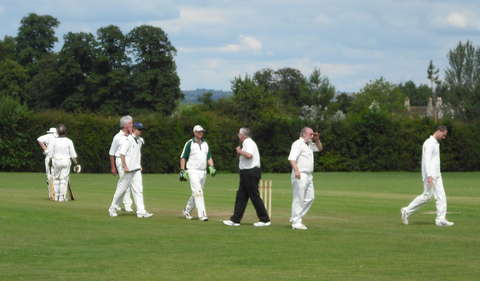 Mike Shorthouse – relieved to complete another over. Adrian Hills confronts the umpire. 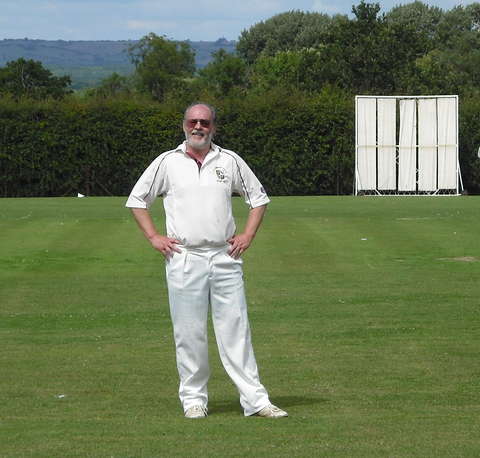 “It was quite easy really!” 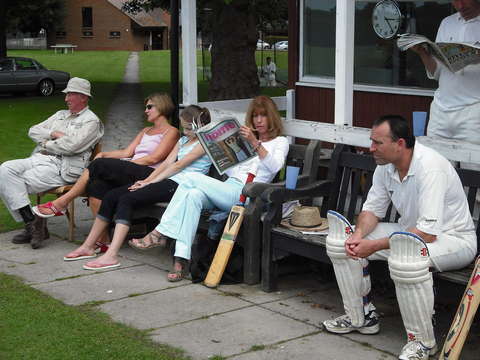 “God, this cricket is boring!” 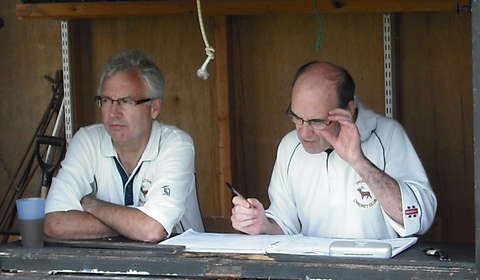 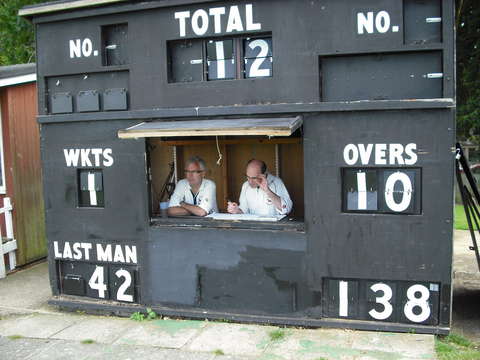 James Race came in to bat – and soon offered a catch – and another – but neither were taken. James is an expert at captalising on fielding mistakes. But he couldn’t do much about Malcolm Hills who bowled superbly – conceding only six runs off nine overs. Finally in his ninth and last over, Malcolm removed Peter Cowdrey for 10 via a catch by Matthew Johnston. The Captain’s were 34 for 2 off 17 and the run rate was still increasing. 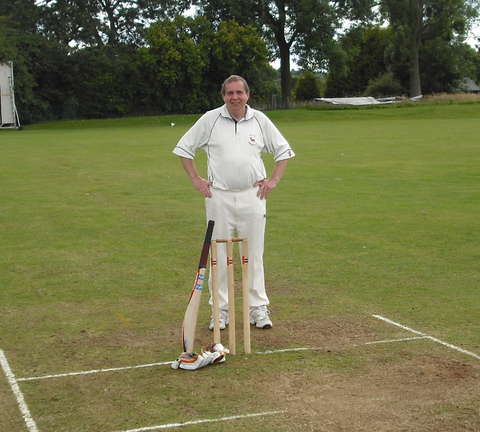 The camerman takes an opportunity to reverse roles during drinks. 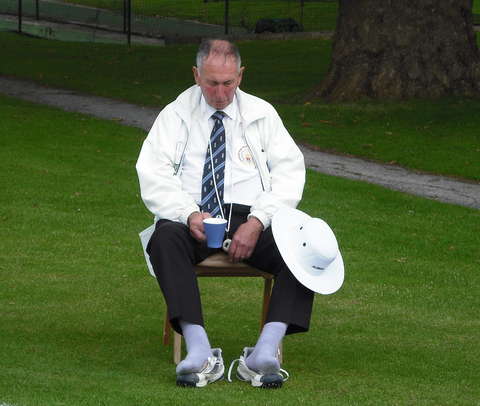 It’s all too much for some! 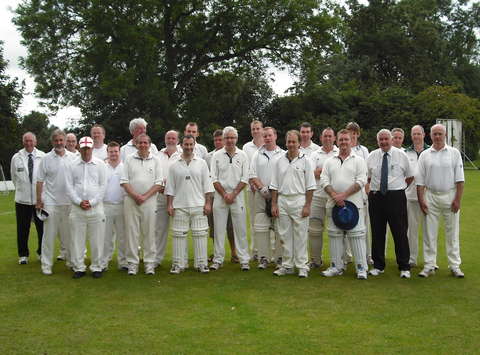 You don’t often see England and Australia inter-dispersed like this. 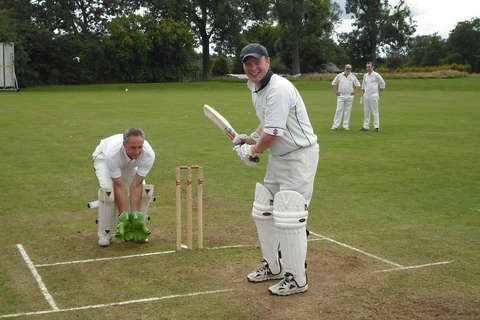 How can you tell that this live action was a fake! 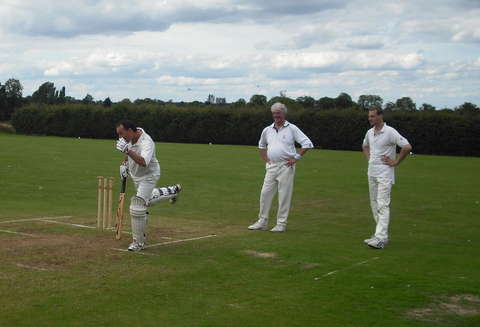 Guy Burford joined James Race and Matthew Johnston came on bowling downhill. Giles Shorthouse had a short burst at the other end (2 overs) followed by mark Deacon (4 overs). Guy batted superbly for 38. And James played some magnificent shots, but also some aerial shots resulting in several more dropped catches. Adrian Hills took off the keepers gloves and replaced Matthew. After 30 overs the score had progressed to 102 for 2 and only 37 were required off 15. 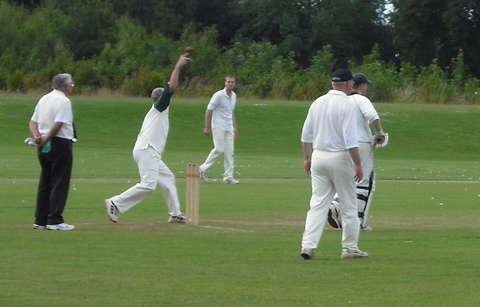 Mike Shorthouse returned to the attack for a second spell, but could not induce another break through. Matthew Johnston also came back into the firing line in the 37th over and was immediately rewarded with the key wicket of Guy Burford, LBW for 35. The score was 130 for 3 and not many more were needed. 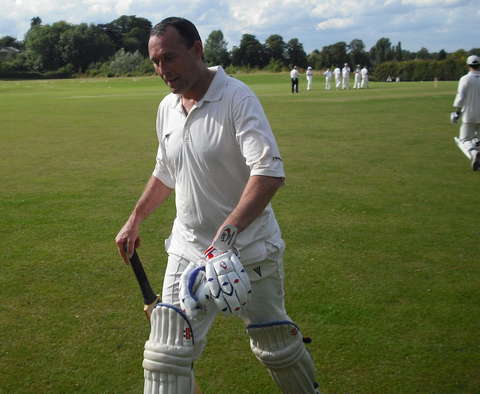 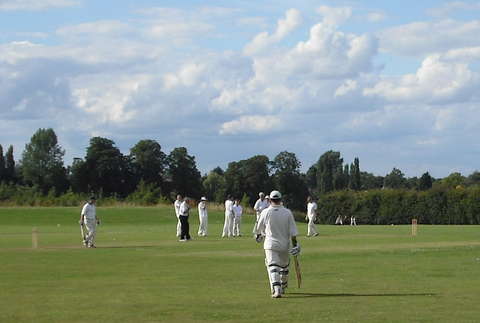 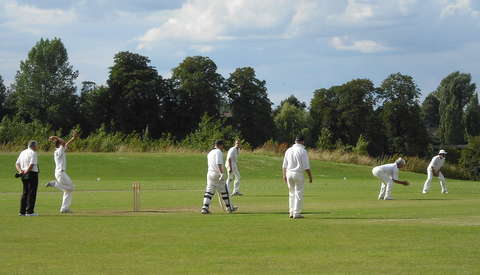 Mat Johnston comes in to bowl against Simon Robinson.

With 137 on the board, Simon became the fourth President’s victim, caught by Mike Shorthouse off Adrian Hills. Only two runs were needed – could there be a final twist? The man of the moment was … Martin Shields …. career agregate one run in just a few games of cricket for Holton. 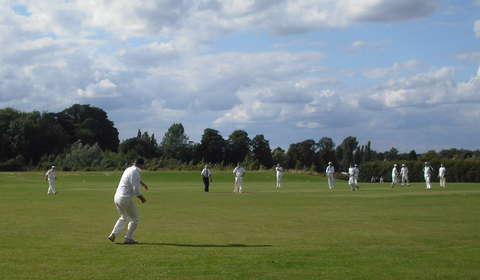 Richard Denner fielding for the President’s. 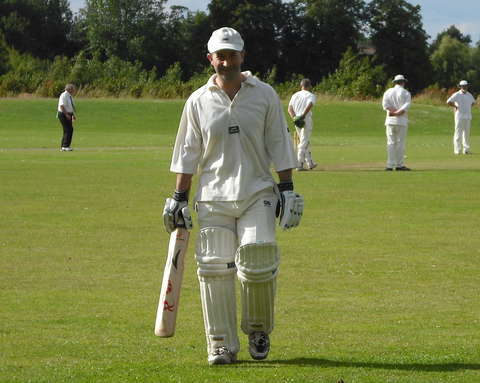 Simon takes the walk back to the pavilion after a catch by Giles Shorthouse. 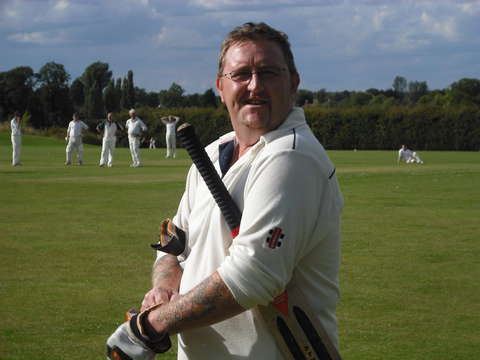 Man of the moment – Martin Shields goes out to bat.

Adrian bowled two dot deliveries to Martin. Then he strayed a little with the next and Martin chopped the ball past square leg and ran for the two winning runs. James Race remained unbeated with a magnificent match winning 68. 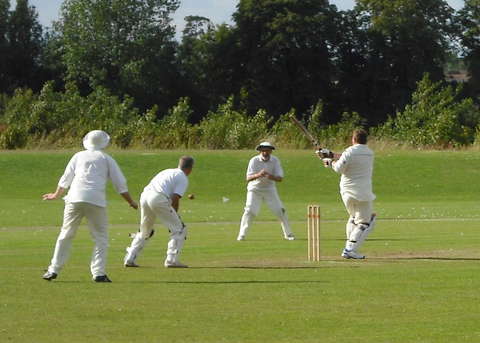 Martin deals with a ball down leg side with a perferect pull for the winning runs. 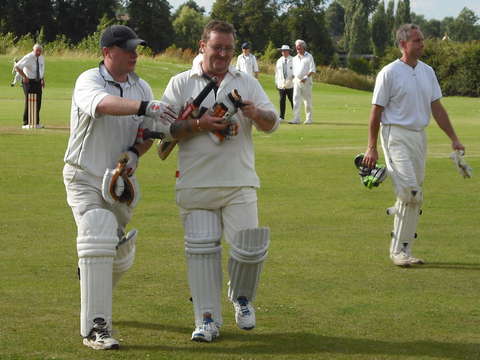 James congratulates Martin .. and asks for a few tips about playing the ball along the ground. 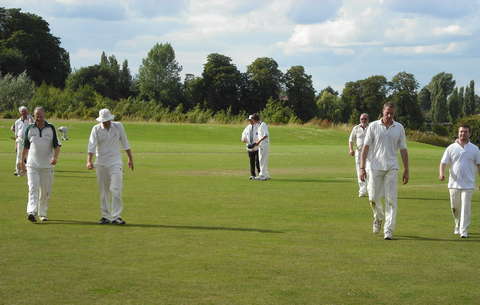 The President’s leave the field. The captain’s XI have won. 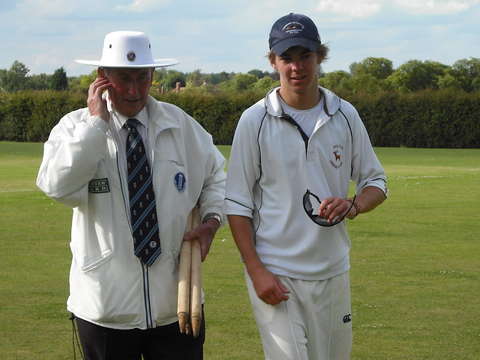 Young and old discuss the finer points of the game.

So the captain’s XI had won by six wickets with five overs to spare. Time for the BBQ and presentations. I wonder who won the man of the match.